My brush with Kardashian greatness 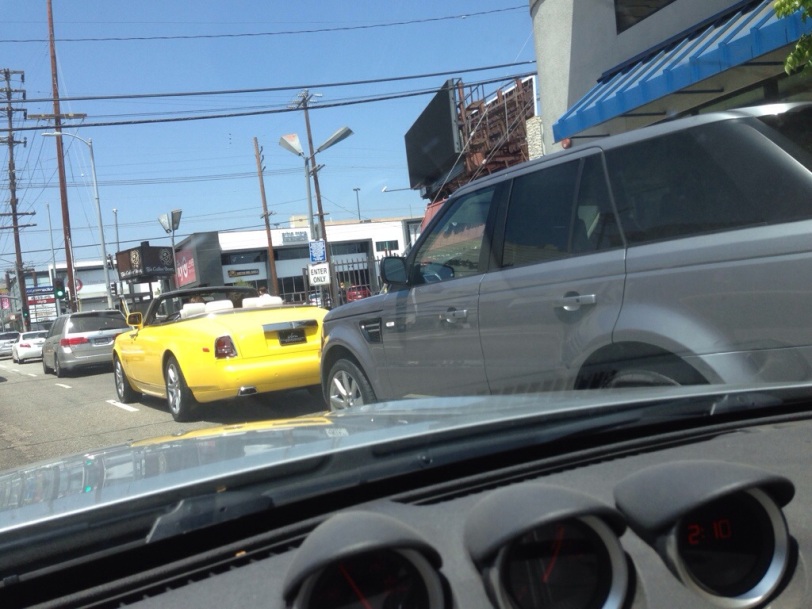 I’ve never seen an episode of Keeping up with the Kardashians. With the sound on. It is on constantly at my gym. Kim Kardashian doesn’t seem so stupid when you can’t hear the words coming out of her mouth and the closed captioning is off.
Back in July, I was driving from Beverly Hills towards West Hollywood (where else?) when a gigantic Canary Yellow Rolls-Royce Phantom convertible nearly bashed into my side because it took a wide turn.
A few blocks later I had the chance to pull alongside the tasteful and modest little conveyance (somebody in Dubai must be pissed that their Rolls-Royce mistakenly ended up in Los Angeles). The driver looked familiar but I figured it was because he looked like so many a douche bag I used to see near Wall Street. Slicked back hair and the whole ridiculous King of the universe drag.
I gave him the mandatory glare, which let him know he did wrong and that I am better than him. Unfortunately, the roof of my car only came up to his doorhandles so he probably didn’t see the look on my face.
Later, in The Daily Mail, I read about Scott Disick, one of the Kardashian satellites, and his yellow Rolls-Royce.
The car is said to cost $500,000. I should’ve let him hit me and sued him for some of that silly Kardashian money.
That’s right, I keep up with the Kardashians and I read The Daily Mail. This is not Masterpiece Theater.