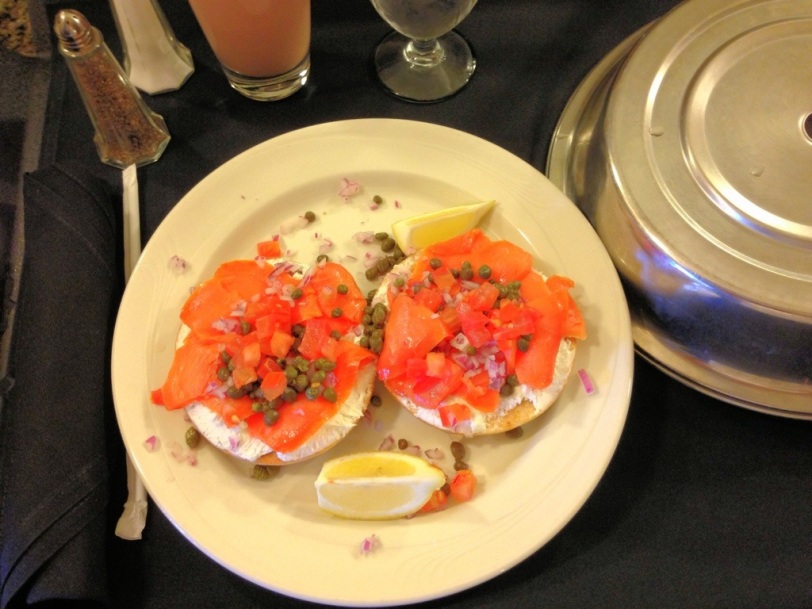 Yes, it involves salmon. But just look at that freaking bagel! There’s a restaurant called Jimmy’s that supplies all the room service for this hotel in the Capitol Hill district. I had breakfast twice. Of course it made my day that the salmon was like butter but they did it right by using enough capers and red onion. You have to have a lot of capers. I also ordered, on another day, sunny side up eggs with their own apple pork sausage. Finally, somebody let my eggs be runny. And with these local farm fresh eggs, the yolks were bright orange and the perfect gravy to spread over the potatoes and toast.
Back to the hotel. I usually roll into towns and have my choice of inexpensive rooms. I could not get a room in Seattle for love or money on Thursday night. Arthur, who was at the front desk of the Silver Cloud told me I should park my car in the garage for free and either use their lobby to make phone calls or their computer to find a room. He did try to call a few for me but no luck. If this is how they treat someone who is not a guest, I wanted to become a guest. After I secured a room at a Crack Den & Suites for that night, I booked a room for Friday and Saturday night at the Silver Cloud. The rooms are modern and sumptuous. You do have to spend a few seconds removing all the pillows off the bed but that will be your biggest problem.
I only used it once but there is a free shuttle service that will take you wherever you wanted to go. I took it to the Mariners game on Friday night and got a bit of a tour. The driver said Yesler Way was the original Skid Row. I thought Skid Row referred to the street where people down on their luck live. That did come later but originally it was the downhill streets used for skidding logs down to the water. Fun lumber fact.
Bonus: The Silver Cloud is right in the gayborhood of Seattle and there is a bowling alley next-door. It’s as if they built the hotel just for me.