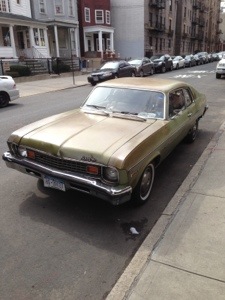 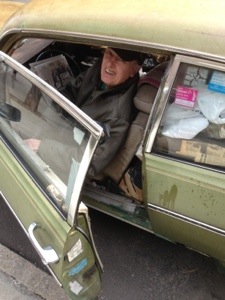 Am very excited. I just got to meet the owner of a car that I have been fascinated with for 30 years. I was lucky enough to find Coach Nicky sitting in his car waiting for alternate side of the street parking rules to be over. It’s a 73 Chevy Nova with 55,000 original miles. Coach told me it was bought new for his grandfather and used and garaged in Westchester County. In the 80s he brought it to a Astoria and that’s when I started noticing it because my father also had a 73 green Chevy Nova. We had a half white final roof because we were fancy. Coach also told me that the 40-year-old car has never been outside of New York State. He knows how it looks and what condition it’s in but he hasn’t had a car payment for over 40 years. Really nice guy.