Happy birthday to Jackie Chan and to me 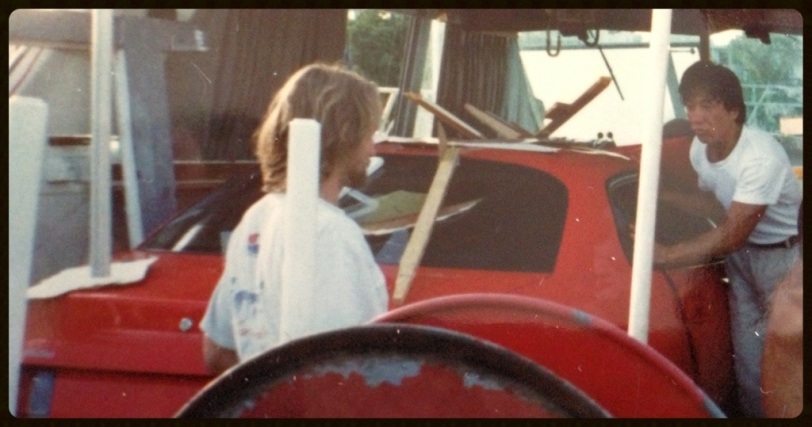 This Sunday actually for the two of us but I’m having my party tonight. I will only be lightly posting today because I have yet to clean my apartment or get a piece of food or drink into the house. At this point I have to forego serious cleaning and cooking. I’m going to go around and remove all the light bulbs in the house and just put a few candles out. And it’s time I joined Cosco so I could get some sort of party platter and keg.
The picture above: My cousins and I went fishing in a small town called Maloolaba when I visited my family in Australia years ago. One of the boats on the dock had a small red Mitsubishi crashed onto the back deck. The weird part, besides the car on the boat, was that there was no road nearby and it was impossible for that Mitsubishi to get the speed or angle from the dock to land on the boat as it did. My cousin assured me that Australians get drunk enough to do the impossible.
When we returned from our trip and walked down the dock, there was a lot of activity around the boat with the car and a lot of shouting in Cantonese. Turns out it was a Jackie Chan movie set and he was there. He asked to pose with the fish I caught, some slimy looking catfish a couple of feet long, I think it was called a Kingfish. I thought I’d be funny and ask him if he could fillet it for me and made a few chop chop kung fu moves. He didn’t say anything. You never know who you’ll run into in Maloolaba!

2 thoughts on “Happy birthday to Jackie Chan and to me”